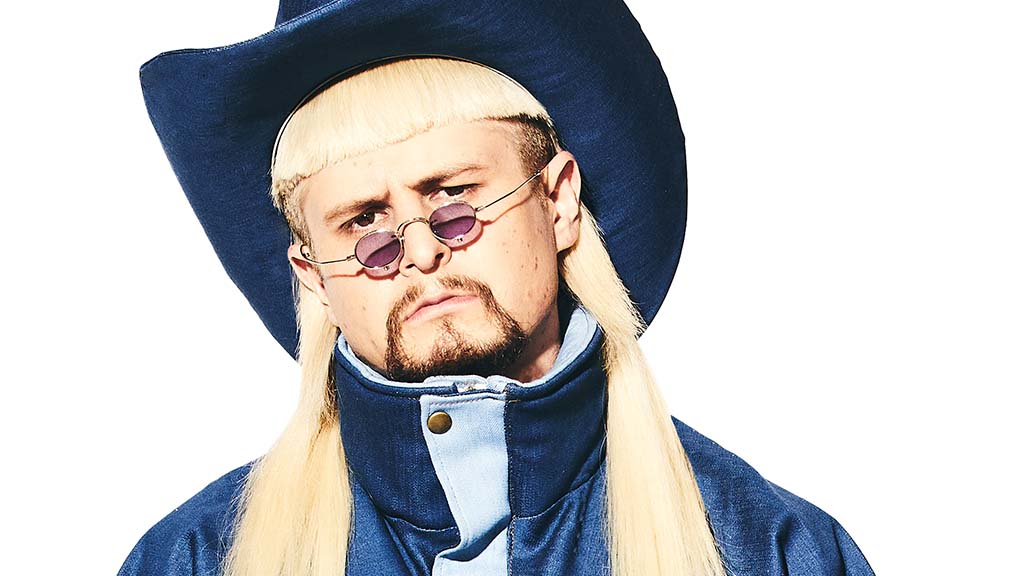 An internet based vocalist, producer, writer, director and performance artist, Oliver Tree explores the intersection where pop and alternative meet sonically and has arrived where art and entertainment collide visually. From comedy to action sports, mock reality TV drama to WWF wrestling in his live shows, the world of Oliver Tree is unlike any artist who has come before him.

A Santa Cruz, California native, Tree has emerged as a polymath from many different projects and iterations over the last 10 years. As unpredictable as one artist can be, no one can seem to put their finger on what Oliver Tree will do next. Unafraid to make you laugh, cry, think profoundly or feel completely uncomfortable for the length of a 4 minute music video, he is on the road to developing his own blueprint for packaging and marketing pop culture in the internet era. Versatile in every sense of the word, Tree not only explores every type of entertainment but also every type of genre in his music alike. The box he puts himself in is limitless. It has no boundaries. Oliver Tree has built a multimedia project designed to challenge people’s perspective of what art is, and he’s not the slightest bit concerned with what anyone has to say about it!

Too much thinking can get in the way of good art. That’s the philosophy that indie singer/songwriter JAWNY has embraced. JAWNY has built his career by intuition, letting his music evolve naturally as he grows personally. Instead of chasing the high of past successes — including his 2019 Gold-certified hit, “Honeypie” — he’s following his gut and tapping into a new vision that reflects his growth over the years. Even as he embraces a “first thought, best thought” approach to making music, his songs have grown in scope and scale — elevating him from songwriter to indie-pop auteur with a kaleidoscopic vision and rich sense of narrative that informs everything he does.

With the release of the blistering “take it back,” JAWNY’s barreling full steam ahead with a dream collaborator by his side. The iconic alt-trickster Beck contributes guitar and vocals to the track, which resulted in a scrappy and thrashing sing-along that can bring a whole crowd into a frenzy. JAWNY joined Beck on a recent tour of the U.K. this summer. “I know that I’m in love with you,” JAWNY announces on the perky, piano-punching intro, which bleeds into “strawberry chainsaw,” a cheeky metaphor on love’s sweet-sinister dichotomy that’s delivered with a loose, lively swagger. With his recent release “adios,” he unleashes his falsetto as he realizes his relationship’s fate: “Now I feel like a blackout, New York City grid max out, when she said adios.”

Born Jacob Sullenger and raised in the Bay Area, JAWNY first picked up a guitar at age 6 after watching his dad jam to the Grateful Dead, Pink Floyd, and Led Zeppelin. At 13, he began making beats with his brother, eventually landing placements with several rappers on SoundCloud. “Since birth, I’ve never wanted to do anything else,” he says.

For a while, though, JAWNY got sidetracked. He first convinced himself he was going to be a nurse but dropped out of school almost immediately. Getting back on the music path, he signed up for audio engineering classes but again dropped out in two weeks. “I hated being told that there was a black-and-white way to do things,” he recalls.

That rebellious spirit has kept a fire in him that’s only intensified. At age 20, while paying his bills as a chicken shop cook in Philadelphia, he began recording songs with his own vocals, something he’d been hesitant to do previously but which came rather naturally. People started to notice.

By 2018, he earned buzz with a self-titled debut EP under the name Johnny Utah and landed on taste-making Spotify playlists like Ultimate Indie and Bedroom Pop. The next year, he dropped “Honeypie,” a track he wrote and recorded in little over an hour. The feel-good, funk-inflected song and its music video garnered instant acclaim. It’s since amassed more than 37 million views on YouTube and more than 738 million streams globally. The attention is well-deserved — across these early releases, he demonstrated a unique spark that shone through no matter what genre he was working with on a given day. Every song is punctuated with a strange magic — an unexpected turn of phrase or an unpredictable production flourish — that makes every song feel wonderfully untamed. Now, with an impressive 950 million career streams overall, he’s honed that energy while also developing a focused and brilliant perspective that resembles few other writers working.

In January 2020, less than a year after releasing “Honeypie,” JAWNY signed to Interscope Records and soon moved to Los Angeles. Later that year, he delivered For Abby, a conceptual mixtape built on prickly alt-pop laments featuring both “Honeypie” and “Sabotage,” singled that reached #46 and #33 respectively on Alternative Radio and briefly punctuated the Billboard Alternative Airplay charts in 2021. His follow-up EP, 2021’s The Story of Hugo, served as a gut-punching prequel to For Abby, showcasing JAWNY’s sharp storytelling and lending a peek into the sonic experimentations he’d soon bring to his upcoming music.

Each release has added new wrinkles to his already ornate sound — which helped him grow from a maker of pristine pop songs to a thoughtful songwriter with his eyes on intricate stories and life’s big questions. All the while, he’s never lost touch with the technicolor melodies that fans fell in love with in the first place, but as he’s prepared for his debut album, he’s learned to write with real empathy and depth — the mark of a songwriter who remains more wise and gifted than his years suggest.

But still, even as he proves himself capable of ambitious arrangements and this audience proves they’re able to keep up with him at every unpredictable turn, JAWNY remains steadfastly in the moment as he works on his new music. “I just chased whatever felt right in the studio that day,” he says. “I can’t overthink it.” The resulting songs are whimsical, wild rushes of adrenaline that trace all the twists and turns of life and love in its purest moments. Not only that, his new music captures how JAWNY feels right now, while, importantly, staying connected to every step of the journey that brought him here. “I’m just a giant child at heart,” he says “and I never wanna lose that. Otherwise, what’s the fucking point?”